Mary has embarked on twelve study trips to RIMYI in Pune, India since 1985. Here is a newsletter written during her most recent 2018 trip describing a special trip she took over a long weekend during the Diwali holiday break from classes:

Fully recovered from jet lag now, and also recovered from multiple nights of fireworks celebrating Diwali !! (It was over yesterday).  Imagine the Fourth of July for most of a week. It was festive though and families gathered with special treats, celebrating the Light over Darkness. Last Tuesday morning at 7 am beautiful classical Indian music came in through the windows, there was a free concert in the park next door and we could hear it perfectly in this second floor apartment.

Our classes with Prashant Iyengar have been studies in watching the mind while doing long timings. Bringing awareness and prana to different compartments of the body, and watching the mind itself. How does the mind perceive differently when we are filling our chest with conscious breath, or letting an exhalation finish and pausing it at the bottom? Different sub groups of the class are doing different things such as a backbend over the chair, or ropes with the top ropes held behind while up on the toes away from the wall, lifting the chest, or hanging from the ceiling ropes from the pelvis in an inversion.  The quote from B.K.S. Iyengar floated across my brain, “You show me where the mind ends and the body begins”, but truly as we access areas of the body, bring awareness to it and refrain from just doing, it's like entering a cave and sensing the new space.

My traveling companion Shaw and I returned last night from a two night stay in Aurangabad home of the Ellora Caves and a takeoff point to see the Ajanta caves two hours further away. I visited these caves thirty years ago and it was unforgettable, so when the Institute closed last Tuesday for Diwali, I jumped at the chance to see them again.  The trip was a six hour ride in a comfortable car and friendly driver, but the traffic at times was the kind where you just have to look away and surrender, (as in it looks like a head on collision is about to happen).

Even writing this on my computer in my room, I am still in that mind of being in those spaces. At first you are hit with the scale of these caves, they are huge.  Then disbelief that ancient people (5th and 6th century) could move that tonnage out and carve such intricate beauty in cave after cave (over 30 at each site) some with ceilings as high as cathedrals. They were used for the rainy season, as the rest of the time the monks wandered and taught.

But aside from the architecture, the real presence is stillness and vibration; the huge Buddhas seated with such calm repose, the intense darkness of some the barren cells used for meditation, the resonance when Shaw and I chanted Om in a small meditation cell.  A large group of Buddhist visitors chanted a long beautiful Sanskrit chant in the main hall and the whole cave came alive.

We were visiting like someone coming in your house when you are not there. But the paintings that survived in the Ajanta caves depict vibrant colorful lives, murals dense with humans and animals that tell progressive stories. Some caves were Buddhist, with either a large Buddha in a recessed area framed by columns and other standing figures flanking them, others were of a Stupa, a symbol of the Buddhas death. One of the most famous at the Ellora Caves was a Hindu ‘cave’ called the Kailasa Cave that was not carved out of a mountain but the mountain was carved away from the cave, leaving a standing structure of two stories, embellished with elaborate carvings and statues, complete with a bridge connecting the different areas of worship and a huge surrounding walkway with more relief carvings on the walls. Really incredible.

We paid to have a guide the first day at the Ellora Caves, and although we learned a lot it was too ‘heady’, so for the second day at the Ajanta caves we just followed our hearts.  It was much more impactful. They are profound spaces, and hearing dates and details is like standing behind a scrim, not a feeling of really being there with it...

The day before I left I watched a scene from the living room window occurring in  the neighbors courtyard.  A big pile of gravel had been delivered and three workmen, and one women were carrying it bag by bag on their head or their shoulders.  Seeing them heave this weight on their bodies and then WALK UP TWO FLIGHTS of stairs (!!!) to deliver it to an second story patio just blew my mind.  It was very hot. I was having an asana practice, and felt my privilege to choose how hard I would work, and also felt a lot of respect for those workers. I suppose that’s how the caves happened, bag by bag.

Today we were thrilled that Geetaji Iyengar taught the women's Saturday morning class.  Geeta has been my teacher from the beginning, but health issues have made her teaching more rare, so it was a wonderful special day, and the class was excellent as usual. 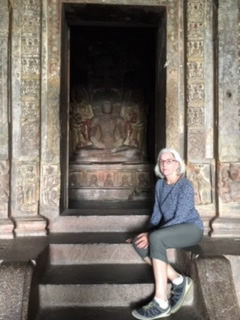 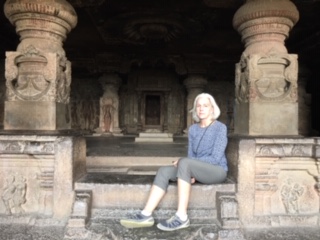 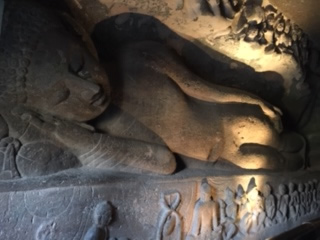 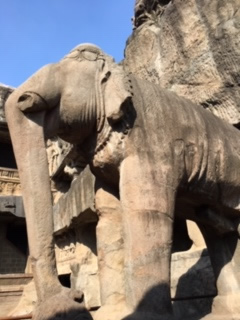 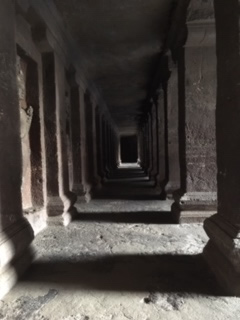 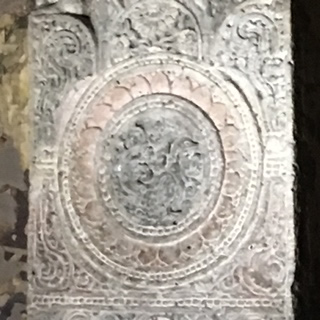 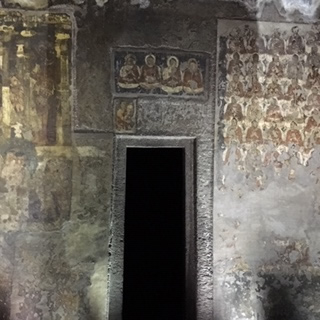 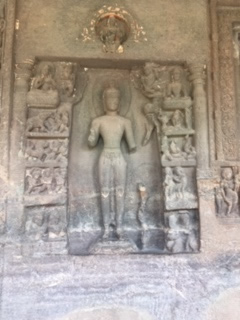 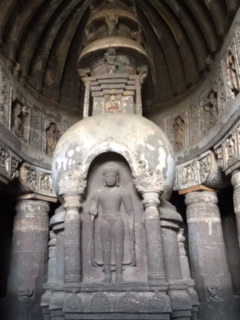 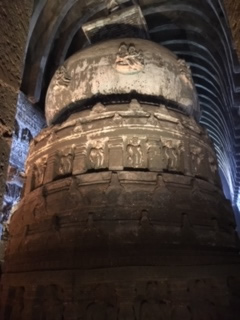 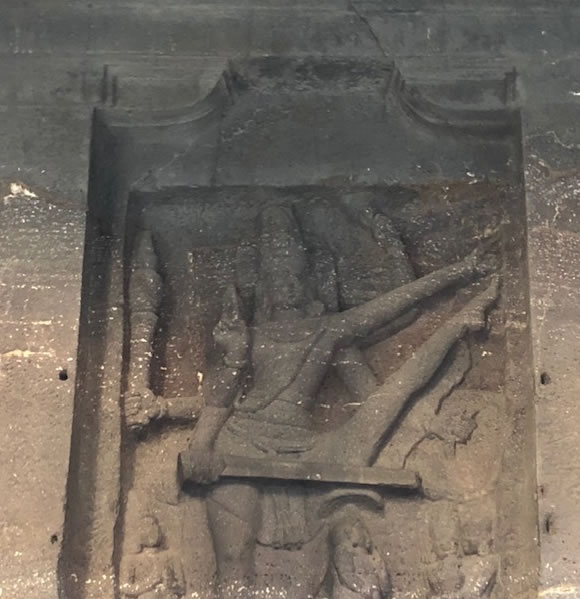